OUR GIRLS' GOLF TEAM IS GOING TO STATE! 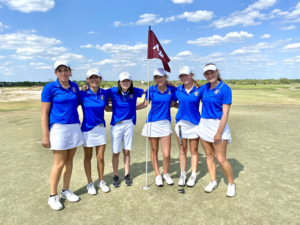 Our Lady Trojans' Golf team advances to compete at the State Championship tournament. click for more info....
Anderson High’s Lady Trojans Golf Team Makes School and
Austin Independent School District (AISD) History
The Lady Trojans are going to STATE, a first for a high school girls team at
Anderson
Austin, Texas, April 20th, 2021 L.C. Anderson High School’s girls golf team fired off a two-day total of 614 to
comfortably place second in the University Interscholastic League (UIL) Region III-5A Golf Championship,
qualifying them for the UIL Conference 5A State Championship. The Lady Trojans are the first girls golf team to
reach the State Championship in golf in the school’s 48-year history.
The Region III-5A tournament was held in College Station at the The Golf Club at Texas A&M on April 19th and
20th. 14 teams from 12 schools contested for the three spots to advance to State. The Anderson team is made
up of junior Sloane Panter and sophomores Darrelyn Webster, Farah O’Keefe, Caroline Dasch, and Karime
Nichols. The team is coached by Johnny “Coach Mac” McPherson, in his sixth year as head coach of Anderson
Boys/Girls teams, and Melissa Williamson, an Assistant Coach since 2018.
Darrelyn Webster shot a round of 71 and 70 for a two-day total of 141, 3 under par, and medaled second
place. “I have played golf since I was 4 years old and I have many great tournament memories but being part
of this team means a lot and after the season was cut short last year due to Covid this was a very special win,”
Webster said. Webster and O’Keefe, who finished fourth, were First-Team All-Region and Dasch (8th) was
Second-Team All-Region.
Coach Mac was equally proud to be a part of this historic event, “Last year this team made Anderson High
history with its winningest season, then by sweeping District and sending both our girls teams to Regionals this
year, and now by advancing to State. I can’t wait to see what is in store for them in the years to come.”
The UIL 5A Golf State Championship will be contested in Georgetown at White Wing Golf Club on May 10th
and 11th.